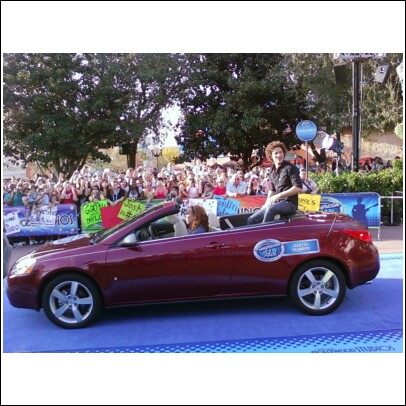 The night started off with a celebrity motorcade…

Last night at the premiere of The American Idol Experience, Disney gave away the first ever ‘Dream Ticket’, which allows one lucky park guest a ‘fast pass’ to the front of the audition line for a future season of American Idol, and feted the attraction and the TV show the way only Disney can with tons of magical moments and great experiences for Idols, guests, and fans alike. 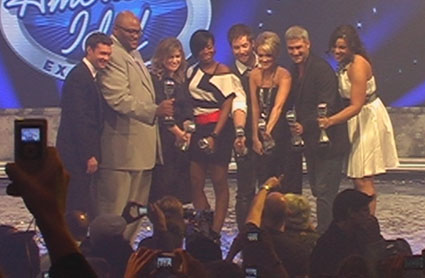 …and ended with all seven previous Idol winners on stage together with their new ‘Idol Awards’ that were presented tonight (and Seacrest too).

I want to tell you all about it, but unfortunately, I only have a few minutes today. So here’s a quick summary and a few of my favorite photos from the night. I promise there will be much more later. 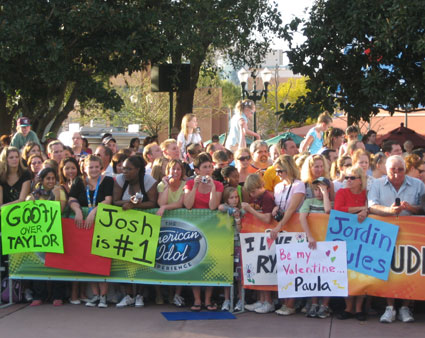 In between there were tons of screaming fans…

With the largest-ever gathering of “American Idol” winners joining in the celebration, Walt Disney World Resort Thursday night raised the curtain on “The American Idol Experience,” a new attraction capturing the energy and excitement of the hit TV show. 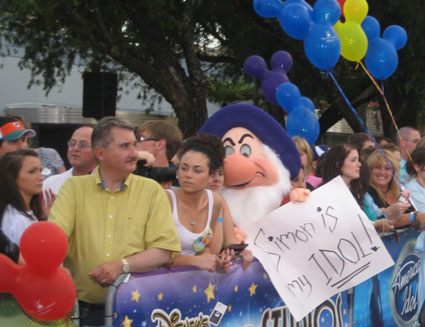 …including one ‘Grumpy’ fan of Simon Cowell (who alas, wasn’t present). 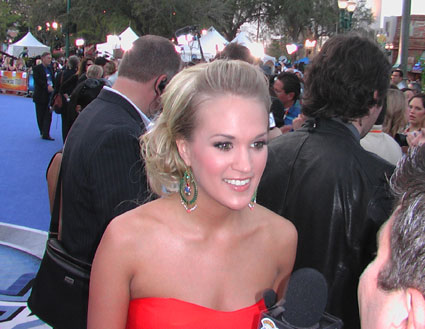 There were lots of great ‘Blue Carpet’ moments, including this one with Carrie Underwood.

More than two dozen Idol stars – winners and finalists from the first seven seasons – plus judge Paula Abdul and TV show host Ryan Seacrest arrived by celebrity motorcade, rolling down Hollywood Boulevard to the cheers, applause and snapping cameras of Disney’s Hollywood Studios guests. Thursday’s gala had all the glamour of a Hollywood opening. Cook treated the supercharged audience with a performance of his popular hit, “Light On,” and after Underwood performed her hit, “All-American Girl,” the pair brought down the house by teaming up for a first-ever duet, singing “Go Your Own Way,” the Fleetwood Mac hit. The premiere even had a “red carpet” – except the carpet was appropriately blue in celebration of the “American Idol” color scheme. 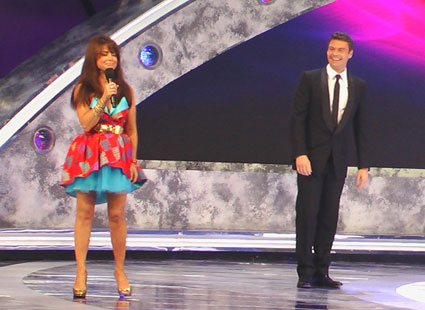 Paula Abdul and Ryan Seacrest took part in a ‘finale show’ with actual Guests as performers on stage.

That color scheme and, in fact, the look of the attraction is similar to the actual TV show set. “The American Idol Experience” was developed by Walt Disney Imagineering in conjunction with FremantleMedia Enterprises (FME) and 19 TV Ltd. and is based on the smash-hit television show “American Idol.” The 1,000-seat indoor theater features twirling neon signs and a multi-layered backdrop inspired by the actual “American Idol” set in California. 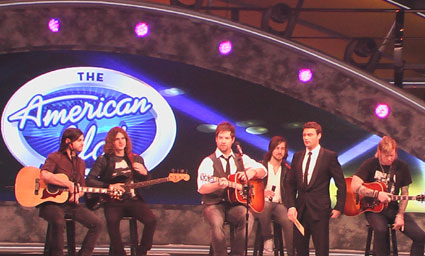 Before the ‘Dream Ticket’ was awarded, David Cook and his band performed…

The attraction is designed to immerse park guests in the authentic feel of a live television production, with some guests 14 or older auditioning to take the spotlight onstage, while fellow guests cheer them on from the audience and vote for their favorite singer with instant results. Audition slots are limited and interested guests are encouraged to arrive early. 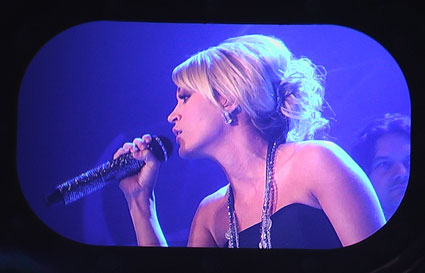 …as well as Carrie Underwood (I like Carrie’s jewel encrusted microphone).

Performers with the highest votes during preliminary shows return for a high-energy grand finale show that same evening. After their encore performances, one is voted the day’s top singer. 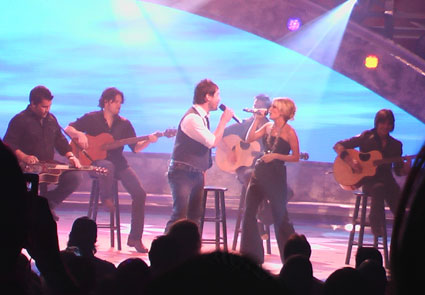 Then David Cook and Carrie Underwood sang a duet. Their first together.

In addition to their new-found theme park fame, the top vote-getter at the finale show receives “The American Idol Experience” Dream Ticket, which allows an eligible holder to schedule a front-of-the-line audition to a future regional audition for the “American Idol” television show. Feb. 14 is the grand opening of the attraction. 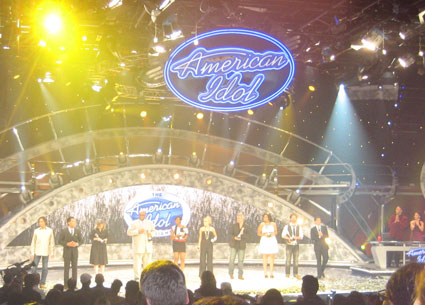 Finally, they announced the ‘Dream Ticket’ winner and he joined all seven previous real American Idols on stage (which must have been a heady moment).

About the Dream Ticket:

Dream Ticket recipients must satisfy AMERICAN IDOL* TV program requirements in effect at time of use, such as age and residency (Season 8 – only ages 16-28 and U.S. citizens or legal permanent U.S. residents eligible to work full-time in U.S.). Dream Ticket does not include travel, meals, lodging or other expenses.

At the end of the night, I couldn’t resist taking a souvenir photo on the same giant icon the stars posed on earlier.

Guests 14 or older inside Disney’s Hollywood Studios may audition to sing that day at the attraction, subject to guidelines in Frequently Asked Questions at Disneyworld.com/idol. Audition openings are limited and will likely close early in the day. Only a few singers will be chosen to sing onstage. A limited number of assigned audition times may be available in advance from time to time.

Complete attraction guidelines are described in the Frequently Asked Questions referenced above, which are subject to change without notice.