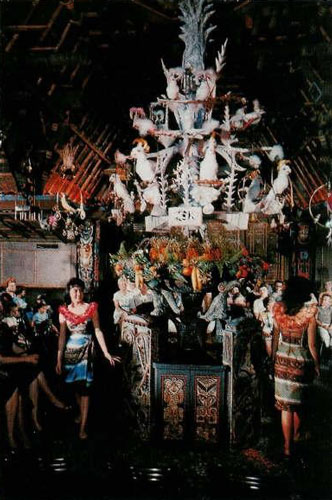 One of the forum members of Tiki Central finally convinced his stepmom, Diana Lai, to tell her story of how she became one of the original VIP Hostess’ for Disney’s Enchanted Tiki Room. That’s Diane facing the camera in a postcard for Tiki Room (above).

I returned to be interviewed by Walt Disney himself! He told me all about his latest achievement, Audio-Animatronics, and said that he needed a VIP hostess to inform important visitors to the Magic Kingdom about the workings of the Tiki Room, his newest project “baby” in Adventureland. At the conclusion of the long interview, he said he liked two things about me: that I had background experience through hula that gave me understanding of the culture and Hawaiian language of the tikis in the Lanai patio behind the juice bar of the Tiki Room, and that I was educated and articulate enough for him to personally train to introduce his “baby” to special guests at his theme park. I was very flattered that he also thought me a “pretty little miss” suitable for his newest project. The show was originally planned to be walk-through in a restaurant setting, but the adjacent Tahitian Terrace was refurbished, and the Enchanted Tiki Room was developed as a separate attraction.

Needless to say for a 19-year old, I drove home floating on air about getting to talk to Walt Disney in person. I saw him on television every Sunday night. The next day I got a phone call asking me to report to Operations as soon as possible to sign a contract. I had been earning 95¢ an hour as hostess at 5 Lanterns, a Chinese restaurant, so I was thrilled to be offered $2.00 an hour, if I were to pay Teamster dues. That powerful union controlled the ride operators, and even after dues, that was a huge increase in wages for me.