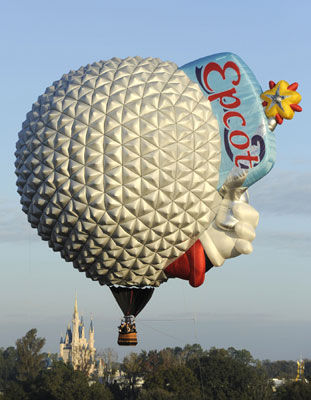 On Jan. 28, 2009 an 80-foot-tall hot air balloon, shaped like Epcot’s Spaceship Earth icon, floated above the Magic Kingdom carrying the Birkett family, of Scottsdale, Az. The special flight was one of the dreams awarded as part of Disney Parks’ 2008 Year Of A Million Dreams contest. We’ll forgive them for not having an updated version of the balloon without the hated ‘Epcot’ wand sign.

On Sept. 17, 2008, Christian Birkett was chosen at random as the dream recipient while experiencing The Many Adventures of Winnie the Pooh attraction at Disneyland Park in California. In addition to the tethered balloon flight, Birkett’s dream included a VIP vacation to Walt Disney World.

After today’s balloon flight, Birkett commented, “When you’re up there, it feels like you’re on top of the world. It’s definitely a dream come true.”