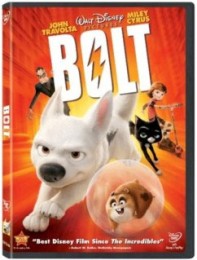 Disney has announced the release dates for the Bolt DVD and Blu-ray editions. I did say dates because for some reason the Blu-ray edition will arrive two days before the DVD version. Did they have to bake the DVDs longer in the oven?

Fully awesome! For the first time ever Walt Disney Studios Home Entertainment will release BOLT in high definition early as an exciting Blu-ray + DVD + Digital File combo on Sunday, March 22, 2009. Two days following, the standard DVD versions will be available on Tuesday, March 24, 2009. Plus, the DVD 2-disc Deluxe Edition and BD 3-Disc both include a special “DisneyFile” Digital Copy of the movie — enabling DVD and Blu-ray owners to receive a digital version of Walt Disney Pictures’ BOLT in their choice of iTunes or Windows Media formats for the fan on the go! BOLT is jam packed with fully awesome bonus features including “Super Rhino,” a new exclusive short film starring Bolt’s biggest fan!

* Super Rhino – BOLT breakout star Rhino, the hyperactive hamster, gets a chance to headline his very own adventure!

The 2-Disc DVD includes the 1-Disc DVD Bonus Feature plus:

* “I Thought I Lost You” Music Video featuring the movie’s stars, Miley Cyrus and John Travolta.

* In Session with John Travolta and Miley Cyrus – A behind-the-scenes look at recording Bolt’s signature song “I Thought I Lost You.”

* A New Breed of Directors: A Filmmakers’ Journey – First-time directors Chris Williams and Byron Howard take fans along as they traverse the road from concept to completion.

* Creating The World of Bolt – Bolt’s painterly backgrounds have wowed audiences across the globe. The filmmakers explain how they fashioned the unique look of this CG movie.

The Blu-ray Hi-Def edition of BOLT includes all the exciting bonus features on the DVD, plus the standard definition DVD, plus DisneyFile Digital Copy, plus these exclusive-to-BD features:

* Bolt’s Be-Awesome Mission – In order to defeat the Green-Eyed Man, Bolt has to find his way through three challenging levels in an exciting interactive game. Viewers can join in collecting clues, conquering ninjas and unleashing the power of the Super Bark!