“Cast” of Pushing Daisies on Twitter to save show

So last night I twittered about how ABC put reruns of Scrubs on instead of a new episode of Pushing Daisies, as was originally scheduled. This morning I wake up to see the cast of characters from the show have followed me on Twitter.

Their presence on twitter appeared to start as an attempt to save the show, but has now morphed into an effort to make sure the last three shows are aired and not buried where even @nedthepiemaker can’t touch them. You can follow their efforts too. In addition to Ned there’s @emersoncod, @deadgirlchuck, @ittybittyolive, and even @deaddogdigby. I’ve put out feelers to see who is behind these twitter handles. 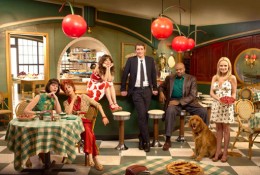 I can’t express how much I’m going to miss Pushing Daises, including Oh Amanda’s reviews here on the blog, but I understand that with the showrunners having already moved on to other projects, there is no way to save it. That said, it would be nice to have the final episodes broadcast and the series continued via an online comic or other method, perhaps twitter (if Doctor Who can be on Livejournal, why not Pushing Daisies on Twitter).