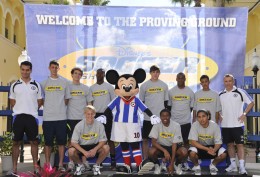 One of the advantages of having a world class training facility on your property is that world class teams want to come and practice there. For Disney’s Wide World of Sports at Walt Disney World Resort that means the Atlanta Braves for Baseball and Chelsea FC for Soccer (Football to you non-us blokes). It also means you can give opportunities to younger athletes they wouldn’t have been able to receive elsewhere.

The most recent example of this is the Disney Soccer Showcase which will be sending 18 players to train and compete in England wearing Chelsea’s colors.