The ToonTown that Never Was 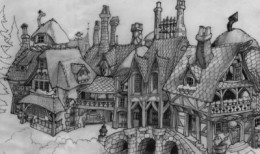 Over at the Disney and More blog Alain Littaye has been examining the amazing talent of Imagineer Hani El Masri. Today’s piece is a look at ‘Mickey’s Toonville’ the original cartoon inspired land designed for Tokyo Disneyland. Alas, when the original Disneyland opened its more rounded ToonTown, Tokyo Disneyland decided they wanted that version instead.

As it turns out Walt Disney World’s Magic Kingdom has a Fantasyland remake on the horizon, I wonder if those budget dollars could be stretched to include a retheming of Mickey’s ToonTown Fair into something like this. Most of the elements are there already.