The case of the night involves armed robbery. They catch a guy who can’t swim at the pool and need to find some evidence to connect him to the crime. Gene Hunt votes to just plant the evidence, but Tyler wants to do it the 21st century way.

Along the way to the suspect getting himself killed and the precinct dispatcher June shot, Tyler meets a naked hippie named Windy. He also finds out that there is a possibility of crooked cops at the precinct, which when he pushes the point doesn’t endure him to his fellow cops.

And then, he hears Bowie’s “Life On Mars” out of the corner of his ear and sees this: 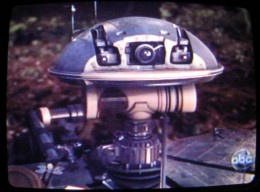 Whoa! Stop the presses. What the heck is that? We’re way off course from the BBC version of the show into something that’s much more sci-fi. Of course, there’s the possibility this is some hallucination on Tyler’s part, but I think we’re getting too much detail for that. It looks a lot like the Mars Rover’s we’ve all come to know and love.

Anyway, the rover causes some sort of memory flashback (forward?) in Sam Tyler and then scuttles off. Next thing we know Windy is serving some Lasagna laced with Mary Jane to Tyler, who wisely passes.

Turns out that June was in over her head with the suspect and helping him pull off his capers by being their lookout.

With June’s help there’s a big drug bust… which includes a toy model version of that Rover that Tyler encountered earlier in the show. So what do you think that Rover is? I’m entertaining speculation in the comments below.

I’m very impressed by the writing in this show, just as I was in the BBC version. But this show is placed in NY City and the crime and drama reflects that. It’s a little grittier and a lot more emotionally complicated than I remember the original being.

So far, I’m very happy with my choice to watch Life On Mars. I hope you’ll give it a chance too. I don’t think you’ll be disappointed. Catch up with the first two episodes over on ABC.com if you’ve missed them.

(I also recommend reading Grant McCracken’s take on the show)