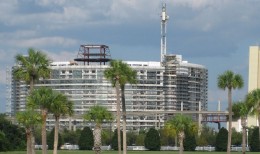 If you’re thinking of buying into the Disney Vacation Club, but don’t like the idea of waking up to animals outside your window at the Animal Kingdom Lodge Villas (I’m sure there’s one or two of you out there), then you might want to head on over to DVCNews.com and check out the newly revealed plans for Bay Lake Tower at Disney’s Contemporary Villas. A name which, by the way, implies there will be future DVC towers at the Contemporary. Chew on that for a while.

Sure, it’s not even officially announced yet, but that hasn’t stopped Disney from building it. And where there is construction, there are construction permits. DVCNews scoops up those filings and posts some revealing details of just what a future DVC owner might get when buying into this Magic Kingdom adjacent vacation club property. Ladies and gentlemen, get your checkbooks ready.

I like the fact that there will be Bocce Ball and Shuffle Board courts. I think Bay Lake Towers might be taking that ‘retirement home’ theming just a bit too far.