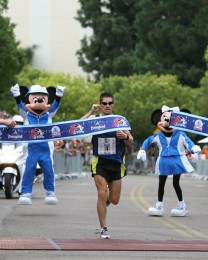 John Lucas, winner of this morning’s half-marathon at Disneyland, is a real fan of Walt’s magical kingdom. He proposed to his then girlfriend at Disneyland and later honeymooned there as well. Lucas was so excited to run the half-marathon, he even set a new course record. Congrats to the Eugene, Oregon resident. Eugene is still track and field headquarters.

I love this picture of Lucas crossing the finish line. It looks like Mickey Mouse is so excited he’s levitating right off the ground. And check out the size of Minnie Mouse’s sneakers, I doubt she could run 10 feet in those. 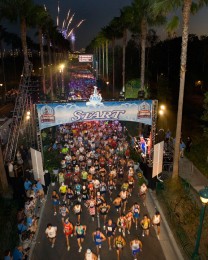 Course records were broken in Men’s, Women’s and Master’s divisions in the third annual Disneyland Half Marathon, Sunday at Disneyland Resort.

John Lucas, a marketing specialist for a sports apparel company in Eugene, Oregon, crossed the finish line first with a Disneyland Half Marathon record time of 1:08:05 (exactly two minutes faster than the 2007 winning time), leading the field of an estimated 13,500 participants.

“It’s a very meaningful place for me,” Lucas said of Disneyland. After qualifying for the Olympic trials in the 2006 Los Angeles Marathon, Lucas took his girlfriend Molly to Disneyland and proposed to her in front of Sleeping Beauty Castle. The couple also honeymooned at the Resort after their wedding in 2007.

“My favorite moment (in today’s race) was coming back through Disney’s California Adventure and seeing Mrs. Incredible and Sully cheering us on,” Lucas said, referring to Disney•Pixar characters who lined the course.

Lucas said he liked the competitive field and “the flat course really helped me keep a rhythm.”

Mary Akor, 31, of Gardena, Calif, was the women’s half marathon champion. Akor finished with a Disneyland Half Marathon women’s record time of 1:19:24, despite losing her race chip and having to start from the back of the pack. She caught up with the women’s leader at approximately the five mile mark, in the 13.1-mile event.

“I had to make my way through all the other runners,” she said. “But it was a great race with so many people out there cheering us on. That really made it special.”

Kevin Broady, 45, of Brea, Calif., who finished first overall in the 2007 Disneyland Half Marathon, earned a notable Master’s Division (age 40+) victory this year with a division record time of 1:13.26 and a fourth place overall ranking.

In the men’s Half Marathon wheelchair division, Ralph Pieplenbos, 55, of Monrovia, Calif., crossed the finish line with a time of 1:19;27

Last year’s winner of the women’s half marathon wheelchair division, Kristen Messer, 21, of Austin, Texas, repeated this year with a winning time of 1:37:42.

Approximately 13,500 runners from 50 states and 16 countries registered for the magical 13.1 mile Disneyland Half Marathon this year. The field included first-time half marathoners as well as veteran runners. The course traveled through two Disneyland Resort theme parks and along Anaheim streets with landmarks such as Angels Stadium and Honda Center, while colorful Disney characters and festive music inspired them along the way.

Runners who completed the half marathon received a commemorative Sleeping Beauty Castle medal, the signature medal of the Disneyland Half Marathon and one in the Disney endurance series collection.