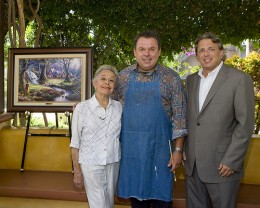 The Thomas Kinkade Company and Disney Consumer Products announced today that Thomas Kinkade is preparing for the release of his newest painting honoring the creative and artistic mastery of one of his childhood heroes – Walt Disney. This image will be the first in the all-new Timeless Disney Moments Collection, inspired by some of the most-beloved original Disney scenes and characters of all time.

“Collectors of both Thomas Kinkade’s artwork and Disney-inspired art will enjoy the Timeless Disney Moments Collection, said Stephen Teglas, VP/GM North America home, apparel, accessories and footwear. “Coupling the timeless themes of Disney film classics with the artistic vision of Thomas Kinkade, we have created a rich and beautiful collection of contemporary art.”

Snow White Discovers the Cottage, the first image in Kinkade’s Timeless Disney Moments Collection, pays tribute to Disney’s first feature-length animated film Snow White and the Seven Dwarfs. This delightful scene brings to life the magic and wonder of the moment Snow White happens upon the Dwarfs’ cottage. “My goal was to go beyond what was captured on film and create a Kinkade interpretation of the scene,” recalls Thomas Kinkade. “With the assistance of the Disney Archive, I was able to access some of the early design work that informed the artistic direction of the film and discovered the original artist’s sketches of the cottage and the surrounding terrain,” he added.

Thomas Kinkade’s detailed “Romantic Realism” painting style pairs perfectly with the whimsy and imagination of Disney film classics. Premiering in 1937 to great acclaim, Snow White is a testimony to the genius of Walt Disney, and the film went on to become one of the highest-grossing motion pictures of its time.

Scenes from other Disney favorites such as Sleeping Beauty, Peter Pan, Pinocchio and more may soon be interpreted by Mr. Kinkade’s paintbrush.