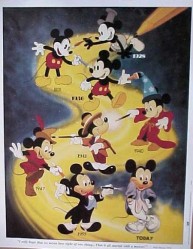 The other day I ran across this postcard of Mickey Mouse through the years. I used to have the full size poster up in my room as a teenager. With a few notable departures (CG Mickey in Mickey Mouse Clubhouse and Runaway Brain (which hearkens back to earlier Mickey ever so slightly)) Mickey Mouse has remained relatively unchanged in design since the 80s.

Now this NY Times article hints that another shift is coming. Whether it’s just an evolution in wardrobe, as in the later stages of that postcard, or a serious makeover remains to be seen. But I think we’ve already seen some hints and the new Mickey Mouse animated short/featurette that Disney is rumored to be working on will reveal even more.

“I love classic Mickey, but he needs to evolve to be relevant to new generations of kids,” Robert A. Iger, Disney’s chief executive, said in an interview.

Mr. Iger talks about the need to balance “heritage and innovation.” For Mickey and other Disney characters, one method is to keep the core attributes of the characters the same, but to update the world in which they live. For instance, Disney is updating Toontown, the section of Disneyland that Mickey calls home. One plan features an old-fashioned trolley, but Mr. Iger is not sure that is a smart idea. Will modern children know what an old-fashioned trolley is?

I certainly hope modern children will know what a trolley is. If not, one ride on the Jolly Trolley will show them. Even then they can just look it up on wikipedia when they get home (or via their netlink at the parks while standing on line).

Btw, the re-introduction of Mickey Mouse to today’s children is occurring primarily through the “Mickey Mouse Clubhouse” pre-school targeted television series. The Mickey kids meet there is very different than the Mickey I grew up on. He’s much more self-assured, not milktoast, and unlikely to stumble or bumble his way through events. In fact, Mickey is more of a leader these days (although he was always the leader of his two closest friends Goofy and Donald). He’s also a problem solver. Which is what the show aims to install in modern children, the ability to solve problems by thinking thinks through and examining what tools you have at hand.