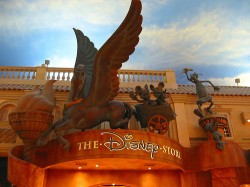 When Disney first decided to “sell” (they actually licensed the store concept and brand) The Disney Stores, there was a general feeling among fans and analysts that Disney had forgotten how to run a retail store chain. That was certainly true, but in hind-sight weakening economic trends may have played a larger role than initially thought. I have faith that Disney Consumer Products has it in them to build back the brand into a something like what it was like a the peak of its performance, if not better.

James D. Fielding, who was executive vice president for global retail sales and marketing at Disney Consumer Products, now takes over the role of President for The Disney Stores Worldwide. He will oversee the North American and Europe stores and work with the Japan based stores that are owned by OLC.

It’s my hope that Fielding will bring back some direction and some “Disney Magic” to The Disney Stores. Return to what worked. Highly themed stores are a must since that sets the stores apart from others in the mall. A decent collectibles area (with store exclusives), some nice watches, plenty of children’s clothes and toys for kids of all ages, and good promotions tied in with movies and theme parks. Some people would add Disney Pins to that, but I think that trend is on the way out.

You may also remember that The Disney Catalog was a casualty of this failed experiment. They definitely need to bring that back (perhaps combined with some new form for The Disney Magazine).

I would also like to see the return of The Disney Gallery concept (perhaps mixed with the new high end clothing and furniture lines). Las Vegas, Anaheim, Orlando, New York City and Chicago are the obvious places to bring those to immediately. The Disney Gallery is an important destination store for The Disney Fan. Even if they don’t have a Disney Store in their community, they’ll go out of their way to find and visit the nearest Disney Gallery.

Keep in mind that while profitability is important, The Disney Stores serve as a ‘brand outpost’ for Disney’s other business ventures. Therefore it’s important that ‘show’ trumps the bottom line. It may cost you a percentage point this year, but it will pay off in the long run with a stronger brand and a stronger Walt Disney Company in total.

But most of all, Fielding needs to bring back the high level of training The Disney Store cast members used to receive. Hire CMs who are already knowledgeable about Disney, have the Disney attitude, are ready to make the magic happen, and willing to go the extra mile to do so. Bring back the perks (Free park passes, trivia contests, etc.) of being a Disney Store CM too. Then train and retrain until The Disney Stores feel like you’ve just walked onto Main Street at Disneyland.