Saludos Amigos and The Three Caballeros, the feature films that resulted from Walt Disney’s goodwill tour through Latin America don’t often come to mind when you think of classic Disney Feature Animation. And yet, these two films were both nominated for Academy Awards. Each film has also introduced flavorful new characters to the Disney’s pantheon. 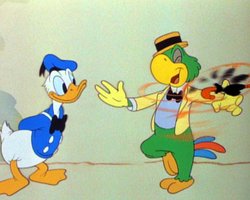 Now, for the first time both south of the border animated adventures are available together on The Classic Caballeros Collection: Saludos Amigos/Three Caballeros DVD. Celebrate a cinematic Cinco de Mayo with Donald, Goofy and Walt Disney himself in this animated and live action addition to the classic Disney collection.

Embark on thrilling adventures to South America and Mexico with Goofy, Donald Duck and Walt Disney himself as they experience all the music, beauty and excitement Latin America has to offer. In Saludos Amigos, Walt and his team of artists, musicians, writers and animators say “Adios!” to the U.S. to explore the heart and soul of Latin America. From the Bolivian Andes to the Argentine pampas, watch these four whimsical animated escapades while they travel to fun and exciting places. This delightful international adventure earned three Academy Award nominations in 1943 including Best Musical Score, Best Sound and Best Original Song. 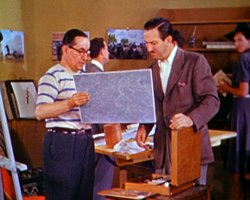 Next, it’s Donald’s turn to take a fantastic journey through these colorful lands with his friends Joe Carioca and Panchito in The Three Caballeros. With lighthearted dance and lively music, this dazzling blend of live action and classic Disney animation is a celebration the whole family will enjoy! The film received two Academy Award nominations for Best Musical Score and Best Sound Recording.

Also included on the DVD is a the featurette “South Of The Border With Disney”. This 30-minute documentary is nearly worth the price of the DVD by itself. It follows Walt and a group of eighteen artists as they travel through latin America looking for inspiration for future films and characters.

If you don’t already have these two great films in your collection, now is your chance to add them before they go back in Disney’s infamous vault for who knows how long. 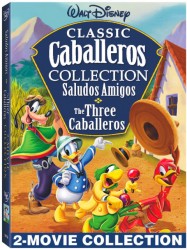