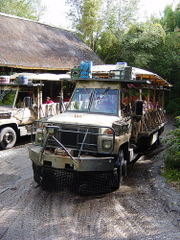 When I was under the weather this weekend and generally to tired to move, there was a report of a little fire on the Kilimanjaro Safari attraction at Disney’s Animal Kingdom. Luckily the vehicle was in a non-animal area so they evacuated the truck. Only minor injuries were reported and the attraction re-opened the next day after all vehicles underwent an examination.

Scott Powers at the Orlando Sentinel tracked down some of the passengers who were on the truck that caught fire and the story actually grew a little more frightening. Apparently the attraction vehicle was on fire with flames coming up in the area behind the driver and in front of the passenger compartment resulting in some hair-singing moments.

Smoke billowed to the back of the truck. The driver did a good job
keeping everyone calm, but all they wanted to do was get off the truck,
she said.

"The driver was really cool under pressure but after the second time
it hissed and flamed again I decided to get all my group off," Russell
wrote. "I didn’t want to blow up."

I knew there was a reason I refused to sit in the row directly behind the driver (I prefer one row back because of my back and the better view). I’m glad there were only minor injuries here. As the attraction approaches it’s 10th year, it’s probably not un-expected for there to be some increased maintenance issues on the aging vehicles.

"Help came really fast. There had to be at least 10 men and woman who
came from every side," she recalled. "They pulled another truck into
our area from an adjoining road about 15 minutes later, then we went to
the back of the park for about an hour, at least."

It’s always been a badge of honor to get evacuated from a Disney attraction. In part because it happens so infrequently and partially because you usually get to see some of the backstage parts of the attraction. I’m pretty sure I would skip the fire and blowing up part though.

Not sure I’d want to get off that truck with the Rhinos hanging around either. If this should happen some where in an Animal enclosure, I wonder if there are ‘people protection’ areas hidden around the Savannah like at Disney’s Animal Kingdom Lodge.

previousDisneyland goes back to the future, the “House Of The Future”
nextIndiana Jones and the Kingdom Of The Crystal Skull trailer is here!