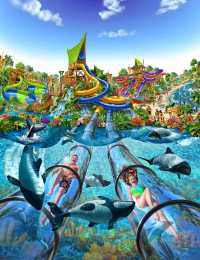 Aquatica by SeaWorld, a new water park from the folks at Busch Entertainment, has announced that it will open to the public on March 1st. However, the official grand opening won’t be until sometime in April. This should give the park time to work out some of its kinks before the world wide press (and maybe us bloggers) are invited in.

The 59-acre water park is located across International Drive from SeaWorld Orlando. It will be a separate admission with one-day tickets expecting to cost $38.95 for adults and $32.95 for children ages 3-9. You can also buy multi-park admission media for most of the SeaWorld and Busch Garden parks.

If you want to work at Aquatica, visit BECjobs.com. So far they’re only listing seasonal positions, but keep your eyes peeled for more positions.

I look forward to another serious addition to the Orlando region water park offerings. Frankly, Typhoon Lagoon had been getting too crowded recently anyway.