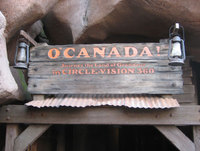 Growing up in the Pacific Northwest we visited Canada so often I felt like I had partial Canadian citizenship (I even took Canadian Government and Politics in College, in case I ever needed to move up there, I guess). Now that I live in the contiguous U.S. state farthest away from our northern neighbor, it’s nice to know I can always visit a little Canadian outpost just a short drive away.

I was a bit nervous when I heard they were updating the "O’Canada" Circlevision 360 degree attraction. Frankly, recent attraction updates at WDW have been a mixed bag. Stitch and Monster’s Inc Laugh Floor come immediately to mind. But the film was seriously dated and needed an update. So, I approached the attraction today with more than a little hesitation.

We walked into the Canada pavilion right at 11AM this morning and was greeted by no discernible changes to the signage or lobby for the show. Cast Member Greg had just started warming up the crowd of about 40 with his "I’m a Canadian" spiel that may have changed a bit from before, but not much. At the end Greg mentioned that we were the first audience to experience the new movie (last night didn’t count since it was a soft opening, apparently) to a round of applause from those in the know and confused looks from the regular guests.

The doors opened and we moseyed in. Again, I didn’t notice any changes. Anyone know if they made any decor changes at all?

I’m not going to give you a complete recap of the new film, but there are some spoilers if you read any farther. Part of the charm of this film is experiencing it for the first time. I thought Canadian actor Martin Short as the host was quite good and he did the absolute best he could with the material provided, some of which was quite good (the Calgary Stampede part) and some, not so much (Ice Hockey anyone?). Most of the humor in the show comes from seeing Short interact with various parts of the film. There is one other bit of humor at the very beginning of the show that takes a shot at the French Pavilion. I understand that’s the next film due for an upgrade. I wonder if Imagineering is trying to start a rivalry.

A few critiques. There are lots of jumps back and forth across the continent in this movie, usually without any warning at all. So I think some feeling of the grand expansiveness of Canada has been lost in this version. The film also misses a great opportunity to mention the loss of habitat that is currently decimating Canada’s Polar Bears. They’re very cute in the film, but surely there was a tasteful way to work in a conservation message.

The new film is 14 minutes long, about 5 minutes shorter than the previous version, and manages to not feel rushed except in a couple of spots (most notably when the under used Mounties come on screen). About half of the film features new footage and one of the things that is most impressive about this new version is how well the old and new footage fits in. For instance, they took special care not to have any 1979 era cars front and center in any of the old footage used. The luminosity and clarity is also nearly the same between the two different eras of film.

Unfortunately, many sections of the old film that made it into the new version have blips and scratches that remain from whatever was used to master this new version. This is most notable during the end of the film while 2006 Canadian Idol winner Eva Avila sings ‘Canada, You’re a Lifetime Journey’. It looks and sounds like they’re still using film projectors, so frequent and careful maintenance to prevent dust scratches is important.

All in all, I am pleasantly surprised by how well this new film version plays. Martin Short made a great host (sort of a counter to the Steve Martin hosted film over at Disneyland) and the parts of Canada that had changed so much since 1979 are now given appropriate due. I don’t think it will cause large crowds to materialize in the Canada Pavilion, but it’s exactly what Disney should be doing to some of the other outdated areas of the park. Nice to see it happen.