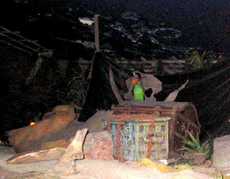 Odyssey Exploration divers working with the Disney/Volvo treasure hunt promotion found a real sunken shipwreck laden with treasure while scouting locations to hid the treasure chest that was part of the Volvo contest. They temporarily named the new location the ‘Black Swan’  Due to scavenge laws, confidentiality agreements with Volvo, and other twists the location of the ‘Black Swan’ hasn’t been revealed. It’s also prevented the winner of Volvo’s contest from retrieving their prize. Sounds like a movie plot all its own.