Tonight was my first time to Disney World’s Wide World of Sports complex. Turns out it was also the first time Major League Baseball played a regular season game at WWoS too. We sat on the lawn along the third base line. Great seats right up close to the action. Well, practically every seat in the 9500 seat stadium is close to the action. That’s what they call intimate.

Not sure how long the concession lines are when WWoS hosts spring training games, but long lines for food and drink were the name of the game tonight. Let’s just say that efficiency was not one of their strong suits at the concession stands. The couple behind us left in the middle of the second inning and didn’t return until the end of the 4th with their food (about 45 minutes). On the plus side, since no one was able to get their food or drinks there were no lines at the restrooms. If you’re planning on attending one of the games on Wednesday or Thursday make sure you arrive early and get your food before the stadium gets busy, or arrive late having already eaten. 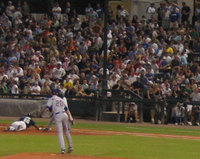 Aside from the concession issue, I thought it was pretty fun night. Parking was easy, the game didn’t get in the way, one drunk idiot ran across the field, and spirits were generally high in the crowd. I think they were hoping for a sell-out, but there were still plenty of open seats in the upper decks and the lawn area. So if you want to get out to the games on Wednesday or Thursday they probably still have tickets. The $15 lawn tickets were just fine.

I hope this is something they consider doing every year. I don’t expect I’ll be driving down the I-4 to St. Petersburg to see the Tampa Bay Devil Rays until my son is old enough to appreciate the experience. But having they stop by to entertain their neighbors to the north was great!

Btw, the third picture is a bonus. The webmasters of LaughingPlace.com, one of Disney fandom’s best sites, are sitting about 13 rows up. Can you spot them?