Disney to extend Year Of A Million Dreams promotion? 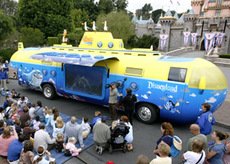 There have been some recent rumors that Disney will extend it’s latest theme park promotion, The Year Of A Million Dreams, from 15 to 24 months (making it more like the Two Years of Two Million Dreams). This will allow more great prizes to be awarded and will also let Disney spend a little of their promotion budget in other areas. Based on the recently announced quarterly numbers, theme park attendance in the US has increased with the current promotion, even if hardly any guests have heard of it until they actually arrive at the parks.

Also if you live on the West Coast, don’t miss the big yellow Dream Submarine as it comes to your community. Disney is touring a Finding Nemo sub and a portable version of Turtle Talk with Crush.