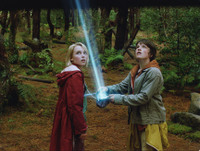 I’ll be honest. I’ve never read the books, nor do I have a child who is old enough to enjoy the film, so I’ve not been very interested in seeing Disney’s "Bridge to Terabithia". Roger Moore, film critic at the Orlando Sentinel, has written a couple of pieces that might just make me change my mind.

The first piece claims that the promotional clips for the film are really designed to make audiences think this is something of a sequel to Narnia, or at least in the same ballpark. That’s something even the film’s director doesn’t understand.

"I’m not too crazy about that," says director Gabor Csupo, laughing. "I don’t think the trailer represents what the movie is about, even though every frame in the trailer is from the movie. It looks like a big fantasy ride, but 80 percent of the movie is set in reality, and with real kids dealing with real problems kids face."

Moore also makes the point that the film treats children with respect. Something you don’t see in a lot of other children films (except perhaps Harry Potter).

Then I read Moore’s actual review of the movie where he gives it 4 of 5 stars (Moore gives 5 stars to almost no films). He says this film slots in with the best of the ‘tween transitionals’ (my term). In my day those were films like "Escape from Witch Mountain", "Pete’s Dragon", and "The Apple Dumpling Gang". It’s actually nice to see DIsney attempt this sort of film again instead of what had been passing for ‘tween transitionals’ during the mid portions of Eisner’s reign. ("Meet the Dweedle’s" comes to mind.)

So I might just go and see "Bridge to Terabithia" this weekend. Who knows, one day I might find my son reading the book too, and that sounds fine with me.