Return to Oz. A Disney Movie? 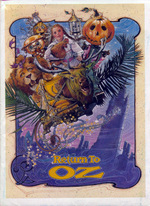 Today has been one of those weird coincidence days. I was just reading a post this morning about someone’s childhood memories of a Disney film that featured the world of Oz. So I went to IMDB to do some research on it and found it was that movie from 1985 called ‘Return to Oz‘ (wikipedia, amazon)and it featured Fairuza Balk as Dorothy. I always liked the film, but it never did very well at the box office. Of course, not everybody agrees with my assessment. MovieMistakes chronicles 44 errors in the film

I totally forgot that it was a Disney film. Disney didn’t even open Disney-MGM Studios until 1989. Which wasn’t helped by the fact that Disney didn’t seek MGM’s approval to use the Oz story for the movie.

4 thoughts on “Return to Oz. A Disney Movie?”