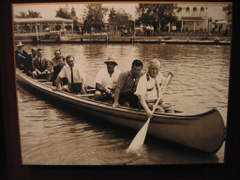 I’ll admit right off the bat that I have some emotional ties to Disneyland’s Tom Sawyer Island. My grandfather was one of the Imagineers who helped realize Walt’s plan for the area (he’s two seats behind Walt in this photo from the Disneyland 50th exhibit). So all this talk about a rumored switching over to a ‘Pirates’ theme on TSI has me doing some serious thinking.

The general idea of spreading the Pirates theme through other areas of Disneyland isn’t anathema to me. The park, especially the western end of Frontierland (now New Orleans Sqaure and Critter Country) has changed significantly many times since the park opened. Heck, Pirates were in park even before NOS. Swiss Family Robinson Treehouse featured cannons and battlements to protect against the pirates from that story and the Keel Boats featured a back story about river pirates in some versions of the spiel. Even one of the existing caves on TSI features buried treasure.

However, I also agree with those that say this appears to be another case of Disney Management deliberately cutting the capacity for an attraction, usually via cutting back on maintenance and labor hours, then using the resulting lower draw numbers as a justification for closing it and putting something in its place. See the Skyway, Peoplemover, Circlevision, and Keelboats for some examples of this practice. With TSI some of the most exciting areas have been shuttered or ignored for years (the fort, see-saw rock, tree house, snack shack, etc). The lack of river activity (no Keelboats, reduced hours for the canoes, etc) also serves to reduce the draw for TSI.

So for Disney to turn around and say that low draw is the justification for the change, is really just another way of saying "we want change here". To Disney’s credit they did try to overlay some adventure playground structures on the island and that hasn’t been working either. But without fixing the fort, treehouse, and sprucing up the other broken areas, it’s not really a fair test of the island’s draw.

The excuse of children not reading Mark Twain doesn’t fly as the TSI was always about more than Twain’s stories. It was about capturing the spirit of exploration and adventure that the untamed west exemplified.
My biggest concern that this may be a mis-step is that management thinks that somehow kids will be as interested in Pirates ten, twenty years from now as they are today. Do they not recall the box office disappointment of Treasure Planet? Even the juiced up Pirates Of The Caribbean attractions at Disneyland and Disney World aren’t generating long lines all day long and it hasn’t even been six months.

Of additional concern is the general story concerning that part of the park. The island sits in the Rivers of America, it’s surrounded by American Forest, American Indians, an American Settler’s Cabin, and the river has two decidedly American boats on it (The Mark Twain and The Columbia). Then there are sightline issues dealing with Frontierland, and Critter Country.

It won’t be easy to move the island to the Caribbean without affecting all those other stories. To me this would be the real reason not to change the theme of the island to Pirates. Story.

Story has to be the driving force behind every change in theme at Disneyland. Making a few bucks off a popular movie theme is not. If Disneyland wants to go ahead with this change, new park president Ed Grier had better be sure of his motivations. Change for marketing sake has failed every time in Disneyland’s recent history (see MSEP for Light Magic and Country Bears for Winnie the Pooh (heck even throw in the Parking Lot for California Adventure)). The question is how confident are we that Ed will make the right decision?