Although I didn’t make it to the parks this last weekend (the horror, the horror, I know) I’ve been thinking about the Magic Kingdom and why it’s been so long since they last added a significant new attraction. Stitch was the last, but is somewhere between a new attraction and an overlay… I think the cost savings of the overlay meant they had to sacrifice some of the story… and it shows with peak time waits under 20 minutes. These pictures are from a few weeks ago, but the story is the same. 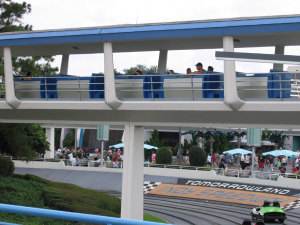 Let’s stay in Tomorrowland. The last land to receive a major makeover, 1994, Tomorrowland shows serious signs of living in the past. To start, there is the Tomorrowland Indy Speedway. Next year the Indy Racing League will switch to an Ethanol mix and the year after that 100% biofuel. But the Autopia cars still burn gasoline. Noisy, polluting, and stuck in the 80s, the current cars have to go. They also use up a lot of real estate that could also be used to expand Toontown or Tomorrowland. The future of the automobile lies in handsfree driving, renewable energy, and customization. Actually, to see the future of transportation you just have to look up. 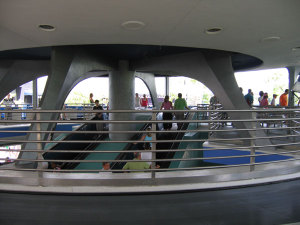 The Tomorrowland Transit Authority (the TTA) or the Peoplemover to
most people, is one part of an overall transportation plan that
environmentally responsible cities must try to implement. But it’s not
meant to be a slow tour through the concrete parking lot that
Tomorrowland has become. It’s meant to transport you places. Plus, as
you can see above, the TTA needs some style and design upgrades. Who is
going to want to ride those blue plastic shells or look at the dull
gray and white track day after day. Disney should design something that
will inspire visitors to go back to their hometowns and demand
integrated mass transit, because if Disney World can do it, then why
can’t Detroit or Houston or Los Angeles. 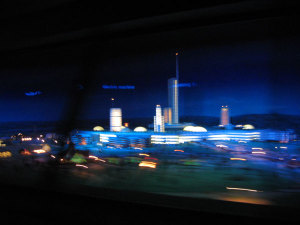 I know, you’re saying leave the environmental message for Epcot. But
I think MK’s Tomorrowland can be about the message too, if offered in a
friendlier less direct way. Afterall, The TTA takes guests right by the
very model for Walt’s vision of the future but then deposits them back
out on the concrete plaza. Rudely devaluing the dream. 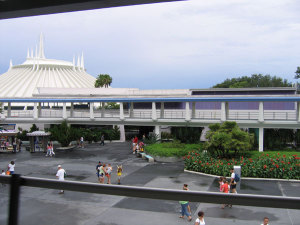 Please tell me the future isn’t going to be miles and miles of
concrete and abandoned buildings. The abandoned building in this
building used to house on of the park’s most amusement park like
attraction, the Skyway. But the Skyway served a purpose; transporting
guests from one side of the park to another and it gave guests an
overview of the park. Something they can’t get now. I don’t see the
Skyway coming back, but this building either needs to be repurposed,
perhaps a garden-esque restaurant, or removed and an attraction put in
its place. 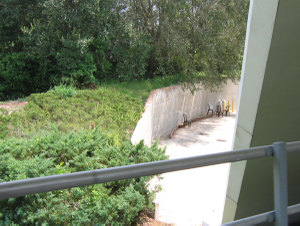 Before we disembark from the TTA, I wanted to point out this bad
show. This area is used by Cast Members as a break zone. I’ve seen CMs
smoking there more than once. At a minimum, move the chairs and
beautiful the place with a few plants.

All is not lost in Tomorrowland. Although the TimeKeeper is gone
forever, that location is supposedly undergoing the installment of a
new attraction. Although that might be on hold. A few other Disney
websites have reported on recent trips to Disneyland by Orlando
executives. Word is they were impressed by what Disneyland was able to
do with the 50th Celebration and by spending some decent money on good
projects that can stand on their own instead of small projects that
turn out to be just a plus for people who were already planning a
vacation to Disney World anyway.

So with that in mind, I humbly submit three projects Walt Disney
World management can do to quickly improve the Magic Kingdom
Tomorrowland area. First, as above, the Indy Speedway is no longer part
of a vision of tomorrow. Come up with something new that fits the
target demographics or rework the autopia to be LEED certified (ie,
non-polluting). 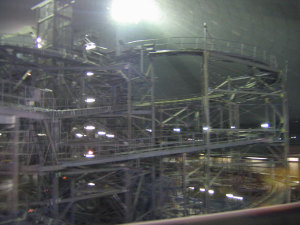 Second, Redo Space Mountain. It’s old and showing its age. My
personal opinion is that a one track, high capacity, medium thrill (no
loop) coaster is the perfect solution here. Although there is a Mission
to Mars in Epcot, America is currently committed to sending humans to
Mars and the Magic Kingdom should be capitalizing on that. Space
Mountain could lead the way. Throw in a LIM launch and a rotating
soundtrack and you’ve got a hit.

Third. One word – Montana. Don’t laugh, because it was the only
successful part of Disneyland’s 1998 Tomorrowland makeover. When asked
what he thought the Future should be like Michael Eisner answered,
Montana. Green, peace inspiring, technologically integrated, but
simple. All the plants in Disneyland’s Tomorrowland are edible, that’s
good land use. But I’d go even one step farther: solar power, wind
power, and LEED rated buildings should be worked into the new
Tomorrowland. Go lush with the restaurants. Large spaces of concrete
that aren’t being used currently by entertainment need to be easily
converted to gardens. Fake palm trees would be replaced by real ones.
This doesn’t mean the outer-space theme has got to go, but the show
needs to convert to one of sustainability. Aliens would know this, or
their civilization wouldn’t have survived to reach other planets.

To complete the new Tomorrowland: Stitch and Buzz would not have to
change (although the cartoon invasion of Tomorrowland should stop
there); the Carousel of Progress could update the final scene once
again; TTA would get a makeover and a second destination (instead of
just a loop); the Timekeeper replacement should continue (I’m hearing
either a new version of the Flying Saucers or a Monster’s Inc
attraction similar to California Adventure); and the industrial cold
steel and rock formations of the 1994 upgrade should giveway to open
spaces, green gardens, and eco-friendly design. The home of the future
is here. It’s time for Disney to give America a vision of how good
Tomorrow could be.