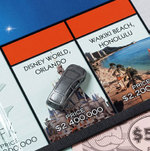 edition. The new edition uses places, icons, and dollar amounts that would reflect the game if it were made from scratch today. Looking at the new space on the board, I have to wonder why they couldn’t get a better photo of the castle and what happened to the ‘Walt’ in Walt Disney World. Oh well, it’s better than having Six Flags on there. (via Orlando Sentinel)

previousTim Burton’s The Nightmare Before Christmas, to be released in Digital 3D!
nextUniversal Studios Slashes Admission Price to win back guests from Disney