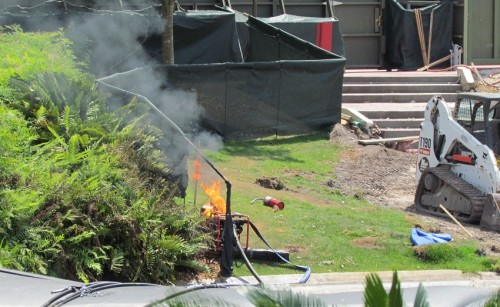 As it turns out, there was one worker in the construction zone. After standing a few paces away and thinking about the best course of action, he left the scene, traveled under the bridge to the other side of main street, then returned with a bucket full of water. Which did almost nothing to put out the flames. Luckily there was a closer source of water, so he took a few steps down the bank and refilled the bucket then dumped it on the flames again, still with little impact on the fire itself. But I think he did prevent it from spreading any further.Read More »Construction Fire at Magic Kingdom Plaza Improvement Project

The Orlando Sentinel reports that a 48-year old cast member of Disney’s water park Typhoon Lagoon was hit by a Jeep while working in the parking lot. The driver of the Jeep left the scene and is now the subject of a hit-and-run investigation with… Read More »Typhoon Lagoon Parking Lot Cast Member Injured by Hit and Run

The Primeval Whirl roller coaster at Disney’s Animal Kingdom added another chapter to its troubled history after a worker injured Sunday while doing repair work on the attraction died today. That worker, identified as 52-year old Russell Roscoe of Webster, FL, died in the hospital… Read More »Disney Worker dies after injuries from accident at Primeval Whirl in Disney’s Animal Kingdom