Yesterday Facebook fans of ABC’s new drama Last Resort were the first to be given the chance to watch the show’s premiere episode – Captain. Five hundred feet beneath the ocean’s surface, the crew of the Ohio-class ballistic missile submarine “USS Colorado” – the most… Read More »Watch Premiere Episode of Last Resort Online 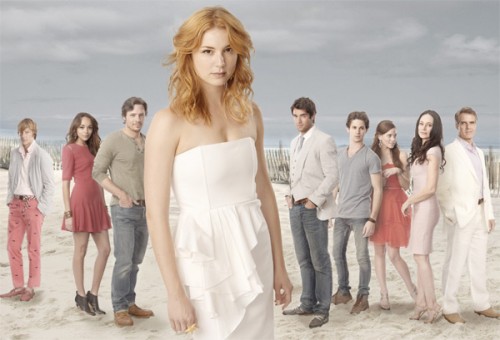 I’d like to welcome back our newest guest author S. Divnich, who will be covering “V” here on The Disney Blog. – Ed.

It seems like we’ve been waiting forever, but the Visitors finally showed up last night with the premiere of V, ABC’s newest sci-fi offering.

The episode opened with an attempt to make it personal – captions reading “Where were you when JFK was assassinated? Where were you on 9/11?” led into “Where were you this morning?” So right off the bat, anyone who has not seen any advance info about this show is going to know – something big’s about to happen.

Tuesday, 6:30 a.m. Having asked “Where were you?” the first block shows us where (and who) our main players are. FBI Agent Erica Evans (Elizabeth Mitchell) awakens to her house shaking. She finds her son Tyler (Logan Huffman) is not in his bed and gets him on the cell, to find he’s in the ER, and barely feeling bad about it. This theme is going to play strong on this show – Erica wants to protect her son, but he’s not going to make it easy for her.

Newsman Chad Decker (Scott Wolf) is showering and heading into work. Ryan Nicholls (Morris Chestnut) is buying an engagement ring. Father Jack is opening the church doors. Val, Ryan’s girlfriend, is at home. It’s difficult to show simultaneous action on a TV show, and the pace felt a little off. We get a shaking water glass next to Erica right off the bat, but it’s several minutes before we see Val’s shaking coffee cup, FJ’s shaking light fixture, Ryan’s ring jumping around on the counter. Regardless, things start to shake, rattle and roll, and you can tell they’re not earthquake-savvy Californians – rather than run to the nearest doorway, Val seems to try to stop her bookshelves from falling over first.

In the street, Ryan does what so many of us have done since 9/11, what must be second-nature to New Yorkers by now – he looks to the sky to see what’s falling. The writers don’t disappoint – the fighter jet falling out of the sky gave me a lurch of déjà vu that was most unpleasant. Eight years later, and not even American, and I can recall the footage from 9/11 in a heartbeat. It brings a tear to my eye every time.

The giant Mother Ships darken the sky and all hell breaks loose. They could have saved some money by inserting footage from movies past – as one onscreen citizen put it, “This IS Independence Day.” And Deep Impact, and The Day After Tomorrow, and so many other running-from-the-end-of-the-world scenes. Conveniently placed TVs show newscasters reporting similar Mother Ships hovering over 29 major cities around the world.

The introduction of Visitors is very cool compared to the 1983 version (more on the comparison later). The bottom of the Mother Ships morphs into a giant movie-screen type thing. On the ground, we see Erica’s maternal “get behind my arm kid, I’ll protect you” gesture with Tyler. Erica’s a mother bear, through and through. And then, like a benevolent supreme being from on high, Anna’s smiling face gazes down on the planet.

The Walt Disney Company is rolling out the red carpet and a whole lot more for its fans at the inaugural D23 Expo. They’ve just released the Event Schedule with lots of great details for this amazing Disney Fan event. Plan to be in Anaheim September 10-13 to check everything out.

Exciting details about the activities and events planned for the four days of Disney’s inaugural D23 EXPO have just been announced. There is so much to see you’re going to have to plan carefully. The D23 EXPO is open to the public. Tickets for individual days or the full four days of this Ultimate Disney Fan Event are available at the website. 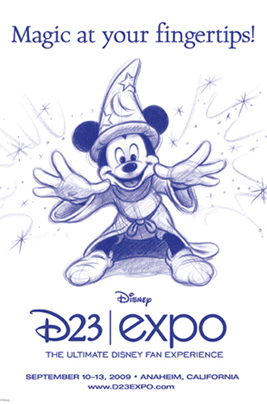 The D23 EXPO will offer guests the chance to get sneak peeks of upcoming Disney movies like The Princess and the Frog, TRON: Legacy, Prince of Persia: The Sands of Time, Rapunzel, Disney’s A Christmas Carol, Tim Burton’s Alice in Wonderland and many others. The D23 EXPO also will present the U.S. premiere screenings of Toy Story and Toy Story 2 in Disney Digital 3D™. More than that, the D23 EXPO will present several classic movies on the big screen, including the original Tron, Sleeping Beauty, The Shaggy Dog, Darby O’Gill and the Little People, along with other exciting screening events. The ABC House Screening Room will present screenings of new television entertainment, including ABC’s vibrant new fall schedule.

The D23 EXPO will offer fascinating explorations of the past, present and future of Disney. Throughout the four days, scores of special panels and presentations will bring new insight into Disney history, let guests go “behind the magic” of Disney theme-park attractions and movies, and get fans up close and personal with the Disney legacy of unforgettable entertainment.

A giant show floor filled with incredible pavilions and interactive areas assembles the entire world of Disney under one roof. From Disney’s global theme parks to the Company’s environmental initiatives, the show floor includes a collector’s area, a gathering of Disney licensees, an eight-room “home” showcasing an amazing array of Disney merchandise, and new technologies being developed by Walt Disney Imagineering. The show floor is the heart of the D23 EXPO. It will also be home to the “ABC House Screening Room,” a sign-up area for the “Lost University,” and kid-friendly play areas that make the D23 EXPO an exciting event for all ages of Disney fans.

“Treasures of the Walt Disney Archives”

The legendary Walt Disney Archives will assemble a never-before-seen collection of more than 100 props, costumes and one-of-a-kind items from more than eight decades of Disney creativity. For the first time ever, the Archives also will present a retrospective of props and costumes from the classic “Captain EO” attraction in which Michael Jackson thrilled theme-park audiences in 3D.

The 4,000-seat Anaheim Convention Center Arena will be home to spectacular presentations throughout the four days of the D23 EXPO. Disney President and CEO Bob Iger will kick off the entire event with an unforgettable presentation that includes a 30-minute glimpse at the upcoming animated feature The Princess and the Frog and a live performance by its vocal star, Anika Noni Rose. Other Arena presentations will incorporate surprise celebrity appearances as D23 EXPO guests learn about the future of ABC, Disney movies, theme parks, animation and more.

Disney Consumer Products will give D23 EXPO guests the chance to explore a host of activities for the entire family, including a Disney Creativity Center hosted by Crayola, the Disney Princess Storytime and Royal Manners event, the Baby Einstein World of Discovery Center, and a magnificent live LEGO building event in which Master Builders will invite guests to join them to construct a life-sized mural of Disney characters, paying homage to the innovation of Disney and LEGO. There will be appearances by best-selling authors, fine artists, and toy designers. There will also be a series of fashion shows featuring the latest styles from Disney Couture, Disney Couture kids and the Wizards of Waverly Place collection. Guests will have the opportunity to tour the first-ever Disney Dream Home and to go “behind the fairy tale” at the Disney Fairy Tale Weddings showcase.

Schedule Highlights are below the jump:

So I went to ABC.com today and started having flashbacks like it was 1973. I was looking around to see if Adventure* was about to boot up on my computer. This nifty pre-roll ad is designed to put the viewer back in 1973 just like… Read More »ABC.com goes retro for Life On Mars