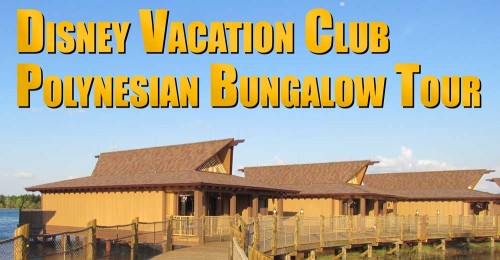 The Polynesian Villas & Bungalows just opened as the 14th resort in the Disney Vacation Club. Join us as we tour one of the Bora Bora Bungalows. It sleeps 8 and features one of the most prime locations in all of Walt Disney World.

The villas are completely new, but they look and feel like they could have been there since 1971. Yes, there is new technology inside (flat screen TVs and a modern kitchen and bath), but you do feel transported back in time immediately upon entering.

As a fan of mid-century architecture and design, I love the look of the Villas. Add in the Tiki elements and I want to move in immediately. Disney recreated some great Mary Blair-esque graphics and brought in Jody Daily and Kevin Kidney to create a unique piece of art that includes the Orange Bird and other Walt Disney World icons. Plus there are other Tiki themed works from the Kidney’s in the kitchen.

I’ve also included a gallery featuring some of the details I wasn’t able to capture on the video tour.
Read More »Walk-Through Tour of Disney’s new Bora Bora Bungalows at the Polynesian Village DVC Resort