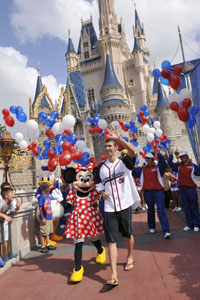 Direct from the Beijing Games Olympic Gold Medalist and world champion swimmer Michael Phelps celebrated his unprecedented achievement with an all-American homecoming parade in his honor at Walt Disney World Resort this morning. In a star-spangled salute amidst confetti and thousands of flag-waving fans in the Magic Kingdom, Phelps was honored for his record-setting wins and for the spirit in which he captivated the world in his quest for Gold.

The 23-year-old from Baltimore beamed as he rode through the park alongside Mickey Mouse, waving to fans who chanted his name.  Magic Kingdom guests joined in “America’s Homecoming Parade” for the swimmer who broke records in each event he entered in Beijing. For Phelps, who also was honored in Disney parades at both Walt Disney World in Florida and Disneyland Park in California following the 2004 Summer Games, it was a sweet homecoming to the United States and to see fans who supported him in his quest for Gold in Beijing. 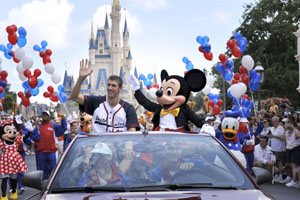 “I am so happy to celebrate here and see some of the fans who supported me,” said Phelps. “It’s great to feel so much excitement around the sport of swimming in the U.S. and around the world.  To top it all off with a parade at Disney World is just incredible.”

During his celebration in the Magic Kingdom, Phelps also took time to meet a group of local swimmers from the central Florida area. The aspiring young swimmers had the chance to talk with Phelps, ask about his record-breaking experiences and see the Gold Medals he won in Beijing.

Phelps, who has announced he will train for the 2012 Games, now owns the record for most Gold Medals in a single event (8) and for a career (14).

All photos Copyright Disney. More photos below the cut: