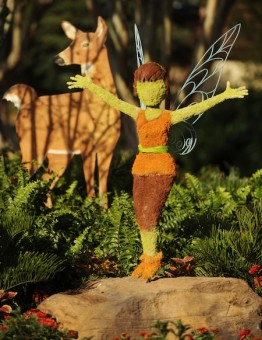 Preparations are underway at Walt Disney World’s popular EPCOT theme park for the 18th annual International Flower and Garden Festival. It opens March 2nd and runs through May 15th. In addition to the usual fun exhibits and beautiful displays, Disney welcomes a new sponsor to the festival this year with the home improvement channel HGTV importing the celebrities and how-to that will help the festival bloom.

Also returning to EPCOT’s Flower & Garden Festival are Tinker Bell and her Pixie friends promoting the fourth and final (?) film in their direct-to-DVD series. That series continues to improve every year and Disney’s in park promotion for the pixies gets better too. Can’t wait to hear what they bring this year, I hear that they’re introducing a new winter pixie from the next film.

“We are thrilled to welcome HGTV and so many of the network’s great Talent to Epcot this spring,” said Dan Cockerell, vice president of Epcot. “HGTV’s design and gardening personalities add an exciting, and entertaining new element to a festival that reinvents itself year after year.”

Expected appearance dates and more festival information is below the jump: