Got yet another cute baby from the baby factory that is Disney’s Animal Kingdom. Reports started last week that there was a baby gorilla out in the park. Turns out the as yet unnamed infant was born February 19th. Here’s the first official photo: 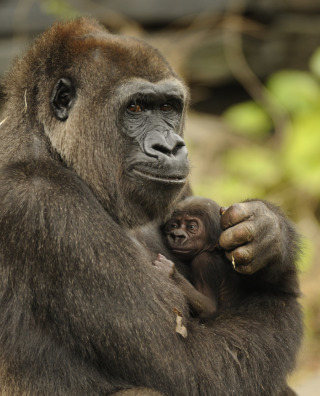 Now guests who visit Disney’s Animal Kingdom are getting a special treat along the Pangani Forest Exploration Trail where they can get a rare glimpse of the newborn gorilla. The critically endangered western lowland gorilla, whose gender is still unknown, is doing well and has already become an integral member of the gorilla family group which includes first-time mother, Kashata, father Gino, and two other females, Benga and Hope.

Members of the primate team at Disney’s Animal Kingdom are encouraged by Kashata’s natural instincts at motherhood. First-time mothers often experience difficulty knowing the right things to do. They must learn to properly hold the baby and adapt to a demanding nursing schedule. Kashata has been a model mother from the moment the baby was born, said Matt Hohne, animal operations director for Disney’s Animal Programs. “She immediately knew how to properly hold the baby and her nursing skills have been exemplary.”

Since Kashata has been holding the baby close to her body, animal keepers have yet to determine the baby’s gender. Most gorilla mothers keep their offspring close for several months while the baby adjusts to the environment. In addition, gorilla babies typically nurse for approximately 12 months and may be weaned between the ages of four and five.

Congrats to everyone on Disney’s animal care team. More gorilla facts below the jump: