Buy 3-nights, get 2 free at Disneyland 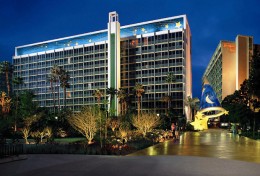 Disneyland Resort wants you to come and get two free days on them if you stay at the resort in the first part of 2010. From Jan. 5 through April 29, 2010, guests get two more nights free when they buy a three-night hotel package with a five-day special value Disneyland Resort Park Hopper ticket.

The Park Hopping tickets included in the two-nights-free package make it easy to experience the best of Disneyland and Disney’s California Adventure. Guests can buckle themselves onto the Soarin’ Over California attraction for a birds-eye view of the Golden State or aim for the highest scores aboard the exciting new Toy Story Mania! attraction at Disney’s California Adventure. Then they can hop over to Disneyland for a journey aboard the recently enhanced “it’s a small world” attraction – the happiest cruise that ever sailed. Guests will enjoy riding “it’s a small world” again and again as they search for the 29 Disney and Disney•Pixar characters now represented in the classic attraction.

The packages feature several extras such as admission to Magic Morning, where families can enjoy select theme park attractions before Disneyland park opens to regular guests. The package also features entry into Mickey’s Toontown Morning Madness – an interactive guest and character experience – and preferred seating at select attractions and restaurants at the Disneyland Resort.

The special offers are valid at the three Disneyland Resort hotels – Disney’s Paradise Pier Hotel, Disneyland Hotel and Disney’s Grand Californian Hotel &Spa. Whether it’s discovering whimsical Disney art at the Disneyland Hotel, stepping back in time to the golden days of California beachfronts at Disney’s Paradise Pier Hotel or indulging your senses at Disney’s Grand Californian Hotel & Spa, staying at any of the resort hotels provides the Disney magic from check-in to check-out. Guests are steps away from two of the world’s most famous theme parks and Downtown Disney, a vibrant dining and entertainment district.

Offer details below the cut:

Florida residents looking for a deal on their ‘staycation’ can now save 15 percent off the best available rate when they book directly with seven hotels located near Downtown Disney. The Downtown Disney Resort Area Hotels include the Best Western, Holiday Inn, Doubletree Guest Suites,… Read More »Florida Residents Save at Downtown Disney Hotels