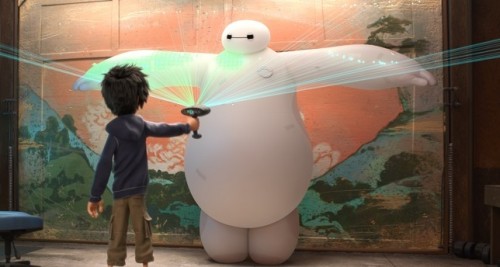 The movie is set in the fictional town of San Fransokyo, but as the name suggests it looks as if San Francisco and Tokyo had a baby. The overall design also lends itself to a slight, kawaii-Japanese animation feel. The animators have packed so much detail into the cityscape that you can probably see the movie numerous times and not see it all.
Read More »Disney’s Big Hero 6 Review – A Uniquely Disney Take on Super Hero Kids

Last night Disney launched its next animated hit with a star studded premiere and after party right in the middle of Hollywood at the El Capitan Theatre. The gold-flecked streets of Hollywood were made to look like San Fransokyo and the red carpet laid out… Read More »Big Hero 6 World Premiere Pics

Guests of Disney’s Hollywood Studios will soon find themselves transported to the city of San Fransokyo. After entering the Magic of Disney Animation attraction you will be able to  tour the lab from the San Fransokyo Institute of Technology and then meet Hiro Hamada and… Read More »Big Hero 6 stars Hiro & Baymax meet & greet coming to DHS

Baymax Has A Warning For You

One of those 1045 cable channels is having a week celebrating the Selachimorpha. Baymax, the robot from Disney’s “Big Hero 6,” has a few words of caution for those who might want to partake:

Full Synopsis below the jump:

Read More »Baymax Has A Warning For You