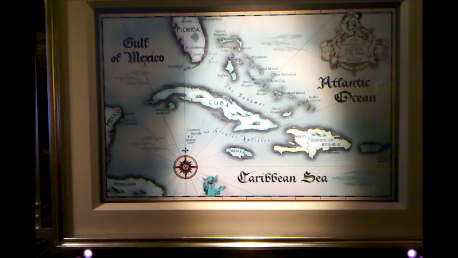 Disney Cruise Line just announced that The Muppets will make their debut on Disney Cruise Line in a new adventure game aboard the Disney Fantasy, the new Disney ship setting sail in March 2012. The adventure game will leverage the ship wide system of interactive art known as ‘Enchanted Art.’ Here’s a clip of three such installations filmed aboard the Disney Dream in January 2011.

Throughout the Disney Fantasy, guests will discover creative and whimsical technical innovations – whether it’s mealtime, playtime or bedtime. “Paintings” spring to life. Guests’ own drawings dance with Disney characters. Interior staterooms have a porthole view of the sea outside. Animated characters chat with guests. The floor beneath children comes alive to movements.

The Muppets will be featured in one of the ship’s adventure games. “The Case of the Stolen Show” will take guests on an interactive adventure quest around the ship, uncovering clues via more than a dozen pieces of Enchanted Art and physical “evidence.”