The female calf, named Squirt, was born November 25 to her five-year-old mother Sushaunna, and nine-year-old father Jingle. This latest birth is part of the Association of Zoos and Aquarium’s Gerenuk Population Management Plan. 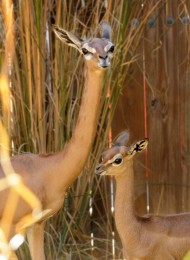 A gerenuk, which in Somali means “giraffe-necked,” is an African antelope with a unique long neck allowing them to eat leaves off trees. Unlike other gazelles and most antelopes that graze on grasses, gerenuks often stand erect on their hind legs and stretch their long necks to browse on taller bushes. They are typically found in areas of dry, bushy shrub. Gerenuk are very well adapted to an arid habitat and do not need to drink much since they get enough water from the plants they eat. Most adult gerenuk reach approximately three feet at the shoulder and range in weight from between 80 to 115 pounds.

At Disney’s Animal Kingdom, guests can see gerenuk when they visit the Pangani Forest Exploration Trail, a self-guided walking tour of native African wildlife. Pangani means “place of enchantment,” and the exploration trail is an enchanting adventure into a lush, tropical forest and a verdant valley that are right out of the heart of Africa. In addition to gerenuk, animals Guests can find on the trail include gorillas, hippos, okapi, naked mole rats, meerkats and many species of exotic birds.