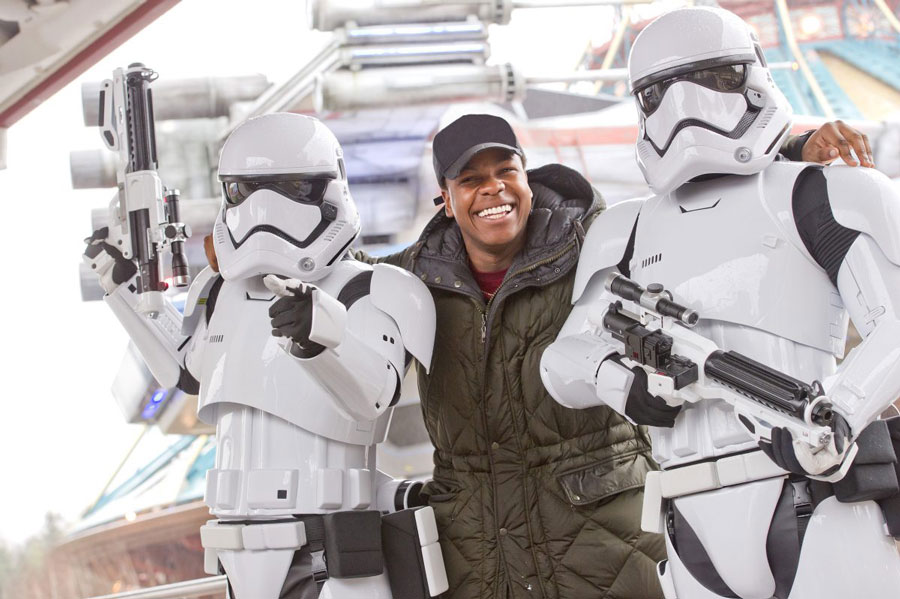 Actor John Boyega is himself, now a legend of Star Wars with is potrayal of FN2187 (aka Finn) in the latest Star Wars trilogy. He recently stopped by Disneyland Paris to help promote that park’s new season of Legends of the Force – A Celebration of Star Wars.

As soon as he arrived at the Disneyland Park, he was surprised to find himself arrested by two Stormtroopers patrolling Disneyland Paris during the special Star Wars season, an encounter that John will always remember.

We knew there was more to John Boyega’s Christmas time detention by Storm Troopers at Disneyland Paris was more than meets the eye.

Enjoying my Christmas weekend in @disneylandparis but my past caught up with me! Arrested by the first order….. again

Staying clear of the menacing First Order, Boyega made his way to see his faithful friend Chewbacca, who you can meet every day during Legends of the Force – A Celebration Star Wars at Walt Disney Studios Park.

Boyega commented “I think that it’s great because every time I’m filming with Chewie, I hug him as much as I can. It makes sense that everyone can experience this.”

Lastly, it was the legendary Darth Vader that John Boyega was brave enough to meet for the first time. After meeting all of his favourite characters, he was able to experience Hyperspace Mountain, which offers plenty of thrills to the sound of John Williams’ music. Next he took his seat on Star Tours: The Adventure Continues, an attraction in which you can meet his character, Finn, depending on the mission you embark on. May the force be with you!

Will you hop in your X-wing for a visit to Disneyland Paris for Legends of Star Wars? Legends of the Force – A Celebration of Star Wars runs through 17 March 2019.