In a move that’s been rumored since height testing balloons were first spotted last year, The Walt Disney World Swan and Dolphin Resort has confirmed that a third tower will be joining hotel complex near Epcot. The Orlando Business Journal confirmed the story first reported by the fan-site WDWNT. The project will feature a 14-story, 349-room hotel located on the current site of the Swan hotel’s tennis courts.

Work on the new hotel is expected to begin any day now (we’ve heard the tennis courts will be closing shortly, if they haven’t already). The grand opening is currently expected sometime in 2020.

The Swan & Dolphin has terrific convention facilities and the new tower will add 21,000 additional feet of meeting space. A space on the top floor will offer meeting attendees the much-desired view of fireworks at Disney’s Hollywood Studios and EPCOT.

The hotel is expected to include a small restaurant and bar that can also be used as event space. Additional amenities include a fitness center, outdoor entertaining space, and state-of-the-art technology.

“We look forward to expanding the Walt Disney World Swan and Dolphin Resort and to marking the next chapter in our decades-long relationship with Disney,” said a statement from Daniel R. Tishman, principal and vice chairman of Tishman. “This expansion is an exciting continuation of our commitment to delivering a best-in-class experience for all resort guests, and is consistent with our recent enhancement of the Dolphin lobbies and resort guestrooms.”

We’re a little disappointed how disjointed the new hotel looks from the two current Swan and Dolphin towers. They were designed by Michael Graves at the request of then Disney CEO Michael Eisner. Alas, Graves died in 2015, so he’s not around to create a third tower. 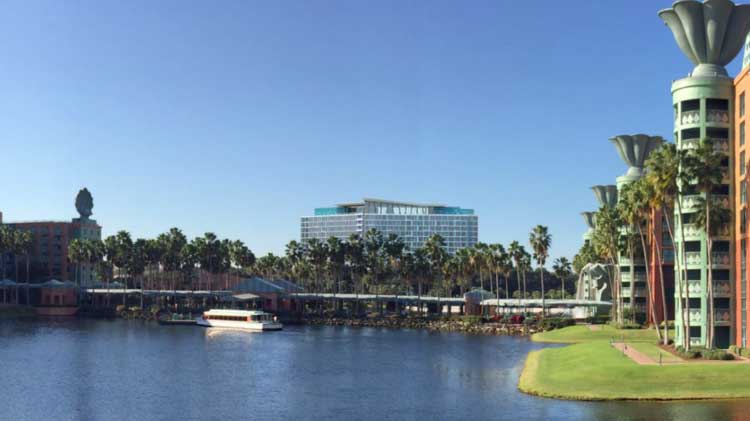 The new tower reflects the nature of modern hotels. Basically a giant box with rooms inside. It’s the amenities, level of service, and interior design that matters to the guest. Still this is Walt Disney World and I think the design should be something that tells a story and doesn’t just reflect light. This hotel would look great in a metropolis somewhere, at Walt Disney World, there should be some theme or at least some whimsy.

How do you feel about the location and the design?