While we don’t yet have an exact date, Disney’s Hollywood Studios is racing to open it’s first big new land in decades sometime early this summer. Toy Story Land is based off Pixar’s super popular Toy Story animated film franchise with the new land shrinking guests down to toy size then sending them wandering through various toy structures erected by the boy from the film, Andy.

We’re getting a new look a one of the two new attractions that will be added to the park when Toy Story Land opens – Alien Swirling Saucers. Guests will step in to a playset erected by Andy in his backyard and encounter the familiar little green alien men who have set up an inter-galactic party. 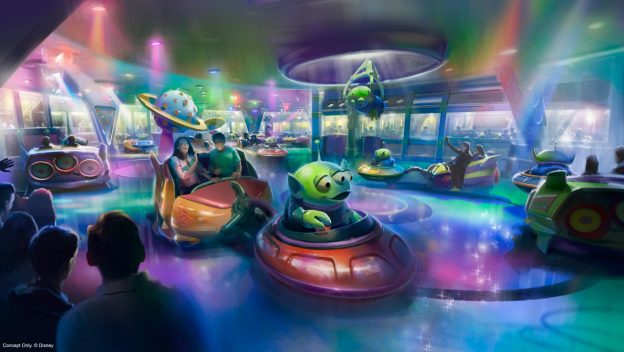 Disney describes the ride as, “Once the aliens have powered up their flying saucers, you’ll get to climb into a toy rocket and hang on as aliens lead the way on an interstellar romp set to an out-of-this-world beat. And if you’re really lucky, you just might get ‘chosen’ by the claw!”

If you’ve been to Disney California Adventure lately and experienced Tow Mater’s Junkyard Jamboree, the Alien Swirling Saucers experience will be very familiar to you. It’s a gentle ride available to guests who are at least 32 inches tall. The thrill is about the same as what you experience on a tilt-a-wheel carnival ride, just a few notches gentler. Like at DCA, the new DHS attraction will have two sides to the ride to help improve the ride’s capacity.

Toy Mater Junkyard Jamboree requires guests with mobility disabilities to transfer from their wheelchair or ECV to ride. It’s not yet clear if Alien Swirling Saucers will have a accessible vehicle or not.

Are you planning a visit to Walt Disney World later this year to see Toy Story Land for yourself?