Easter Eggs are those little details or tributes film makers add to keep fans coming back to see what they missed on their previous viewings. Disney just released a slew of new screen grabs from Zootopia and among them is this cool Easter egg.

Tundra-Town in Zootopia is already a place that Queen Elsa would be comfortable in. Alas, there are no humans in Zootopia, so Disney had to sneak in a tribute to Frozen another way. Look closely at the above picture and you’ll see two little elephants wearing Elsa and Anna costumes. Here we’ll zoom in for you. 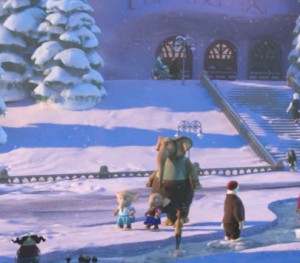 Another Frozen tribute in Zootopia is the character of Duke Weaselton, the larcenous weasel Judy Hopps chases in the trailer. He’s voiced by Alan Tudyk, who voiced the Duke of Weselton, who didn’t like to be called the Duke of Weaseltown. That’s clever!

OF course, we previously reported that Kristen Bell (Anna in Frozen) has a cameo as a voice of a sloth in Zootopia. So there’s a lot of Frozen in Zootopia.

More pictures from Zootopia below.

Zootopia enters theaters on March 4th. Will you be seeing it opening weekend?