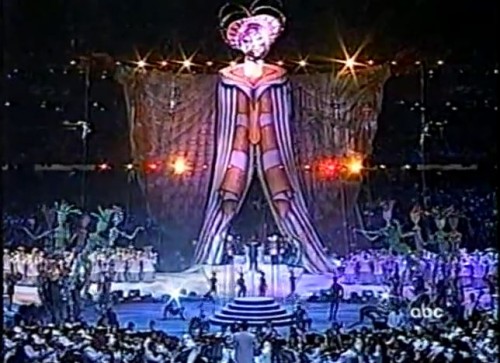 The year was 2000 and St. Louis Rams and Tennessee Titans were competing in the first Super Bowl of the new millennium inside the Georgia Dome. After Gloria Estafan and Stevie Wonder performed in 1999, Disney decided they could do better. Disney was known for the great half-time shows they produced at the Orange Bowl for college football, so they got this right?

What Disney decided to do was a high concept 10 minute concert version of their WDW Millennium Celebration with elements of Reflections of Earth and Tapestry of Nations. Performing was Christina Aguilera, Phil Collins, Enrique Iglesias, and Toni Braxton and they brought out Edward James Olmos to narrate.

Wait, where was Mickey, Minnie, Donald and Goofy? Where are the Disney songs we love to hear? Nope, none of that. We Disney fans all know and love these Millenium Celebration songs now, but at that point, they might as well have been from Mars. I remember being impressed, but the rest of the world was mostly confused.

And that was the last time Disney was asked to do a Halftime show? Coincidence?