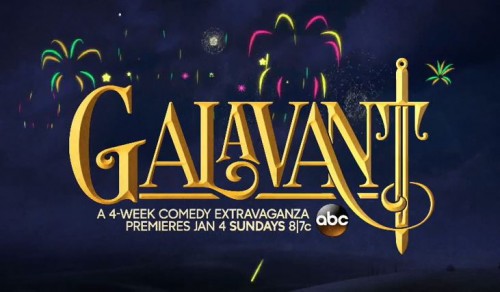 Galavant is Disney’s comedic take on the knights of legends from across the pond. It appears to be important a bit of that British style of humor as well.

I wasn’t quite sure how far Disney was going to take Galavant. But judging by the lyrics to the theme song, they aren’t afraid to go out on a ledge with the humor:

Galavant follows Jashua Sasse as Galvant as the dashing hero fights to get the love of his live, Madalena, back from the evil King Richard. Now, our fallen hero is ready to take revenge and restore his “happily ever after.” But it won’t be without a few twists and turns along the way.

“Pilot” (8:00-8:30 p.m., ET) – When heroic, charming and handsome Sir Galavant loses his true love, the beautiful Madalena, to evil King Richard’s wealth and power, he falls into a deep and drunken despair. Just as our hero hits rock bottom, Princess Isabella shows up with a quest to save her kingdom, defeat the despicable King Richard, and provide an opportunity for Galavant to reclaim Madalena. Galavant is off to become a hero again and strike a blow for true love…but first, Galavant has to fit into his old hero pants.

“Joust Friends” (8:30-9:00 p.m. ET) – Galavant enters a jousting tournament against a boastful rival, Sir Jean Hamm (guest star John Stamos), to test his return to heroic form (and win some much-needed traveling money and a really nice rooster). But it quickly becomes clear that Galavant is a long shot to win. Meanwhile, King Richard asks Gareth to help him become a bit more macho so that Madalena won’t despise him quite so much.

The eight episode series will run through Sunday nights in January.

2 thoughts on “Galavant: The Theme Song”