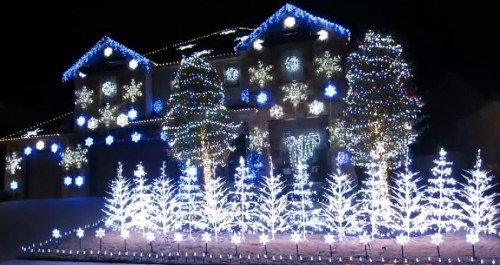 Each year, somewhere in Texas, the terrific folks at Listen to Our Lights decorate their house with over 25,000 sparkling Christmas lights and synchronize them to music. It’s such a popular display that they’ve had to stop giving out their address in an effort to keep the crowds away. Not to worry, they film their work and share it via YouTube so everyone can enjoy.

This year they are back with new light displays that fans of Disney’s Frozen will recognize. Their daughters picked the songs from Frozen and even helped program the displays.

Do you want to Build a Snowman

They’ve been doing this since 2010 and each year the display gets a little more elaborate. But believe it or not, the whole display costs just $15 in electricity to run for the entire season. Now that’s efficient.