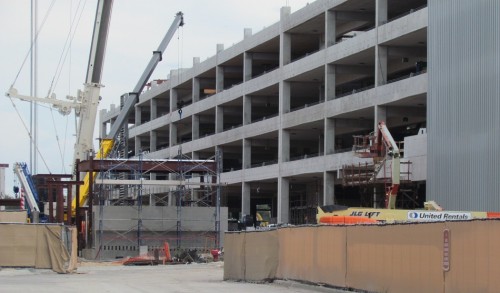 The transformation from Downtown Disney to Disney Springs is fully underway. We’ve been chronicling it through our updates, including the latest updates on new food options and the opening of the first parking garage later this month.

New information regarding that parking garage has just come to light. From a cast member informational flyer, we can now verify that it will be free to park in both garages. When both garages are finished, overall parking at Downtown Disney will have increased by more than a third.

The new garages will also incorporate new technology that will help guests find an parking space. Lights above each space will indicate which spots are available directing guests efficiently to each open space. This technology can be seen in use at Dallas-Fort Worth airport’s parking garage.

The first garage will open later this month and the second sometime in 2016. The first major area of Disney Springs “The Landing” will open in 2015, with phase two “Town Center” opening in 2016. Lots of work will continue on the Westside and Marketplace over that time as well.

Finally, I think it’s safe to say that BabyCakes NYC will once again have a bakery in Downtown Disney. Look for it to open in The Landing area in early 2015. Sound Lion, an upscale headphones store will also be coming to Disney Springs.

Do you think having lights indicating which space are available will make parking at Downtown Disney easier?