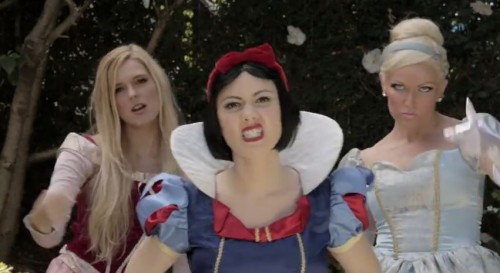 It’s time for an epic episode of Friday fun. Comedy star Whitney Avalon is out with another YouTube video skit and this one is an instant classic – A Princess Rap Battle between Snow White and Queen Elsa. Disney’s original princess throws down with Disney’s most recent and the results are hilarious.

Normally, I only post PG-13 content on the blog, but I’ll stretch the limits for this video. The last line is an expletive. So if that offends you just stop at minute 1:45, you’ll get the gist of it by then. It’s mostly just silliness and fun. So don’t get your panties in a bunch.

Both sides have an argument for why they’re the better Disney Princess, but I think there’s a clear winner, don’t you? Yep, it’s Whitney Avalon, who’s video has cleared a half-million views in just over a week. That’s awesome in my book