The 60th attraction of the Disneyland Paris resort just opened putting a great big smile on the faces of guests. Ratatouille: L’Aventure Totalement Toquée de Rémy (or Ratatouille: The Adventure) opened inside Walt Disney Studios on July 10th. It’s part of a mini-land themed to the cobbled streets of Parise and La Place de Remy right out of the Pixar movie – Ratatouille.

Guests on the attraction will experience audio-animatronic animation and larger-than-life projections that immerse them in the world of Rémy. The ride flies over the rooftops of Paris, through the kitchen, and into the rush of a French dining room all via your own “ratmobile.”

More fun facts about Ratatouille: The Adventure below the jump: 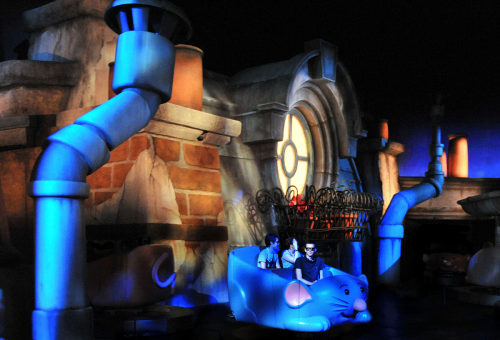 Ratatouille: L’Aventure Totalement Toquée de Rémy and its area were built on French craftsmanship and savoir-faire.