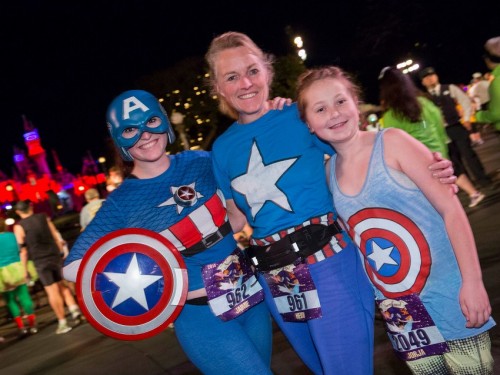 Like a super hero who is trying to be everywhere at once, runDisney is adding a new half-marathon to the line up. The Avengers Super Heroes Half Marathon will debut November 14-16, 2014 at the Disneyland resort in Anaheim, CA. The new three-day race weekend will involve kids races, a 5K and a half marathon, plus several family-friendly events such as a Health & Fitness Expo and a pre-race Pasta in the Park Party.

Super Hero-themed entertainment and characters will be yet another Marvel related tie-in to Disney’s theme parks and make the Avengers Super Heroes Half Marathon Weekend a unique runDisney experience.

“We couldn’t be more excited about this Super Hero collaboration to create this new runDisney race weekend for runners everywhere,” said Tom Wolber, senior vice president of Disney Sports Enterprises and Downtown Disney. “Our runDisney events continue to be hugely popular and by joining forces with the Avengers brand, we expect this race will appeal to an even broader range of runners in Southern California whom we hope will see this event as the perfect opportunity to unleash their inner Super Hero in a race to a personal triumph.”

“runDisney races are a natural fit because our comic book Super Heroes embody many of the same brand attributes as runDisney, such as heroism and intensity with a heavy dose of fun,” said Dan Buckley, president of TV, Publishing and Brand Management for Marvel Entertainment. “This race weekend will have a very distinct atmosphere that will appeal to comic book fans and runDisney fans.”

The Avengers event is expected to be in high demand much like other runDisney race weekends, which have sold out in record time in recent years. Overall, runDisney race weekends attracted more than 163,900 runners last year – a 40 percent increase over the previous year, making the runDisney series one of the largest in the nation.