Once Upon a Time Preview: 3-6 Ariel 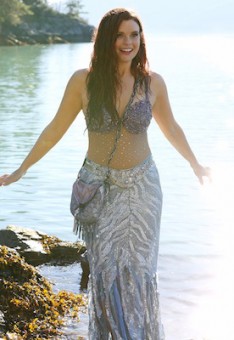 The news leaked months ago that Ariel was coming to Once Upon a Time this season, and I don’t think it’s a spoiler to say her first appearance will be in this week’s episode. After all, the episode title is just her name. I’m excited since they’ve cast Joanna Garcia Swisher in the role, an actress I know best as the older daughter on the sitcom Reba. She also starred in the short lived show Privilege.

Anyway, we meet Ariel in the flashback this week which involves Ariel meeting Prince Eric. Snow White helps their romance along after Ariel saves Snow from drowning.

Meanwhile, in Neverland, Regina and Gold are going to team up to figure out how to defeat Pan. It will be interesting to see Gold rejoin the group. The rest of the heroes will set off to find and free Neal. So, does this mean that Hook tells them what he knows or do they learn Neal is on the island after Gold finds them?

The thing I’ve been wondering the most is why they are introducing Ariel at this point in the series? Her story/back story must have some connection with Neverland or at least what our characters are doing right now. And that got me wondering if she is in the box next to Neal. It’s a crazy theory, but they way they set that up, I know it is going to be a big surprise, and that or Tinker Bell are the only two I can think of right now.

We’ll find out soon enough since the episode airs Sunday night. And after it airs, I’ll be talking about it at Carstairs Considers.