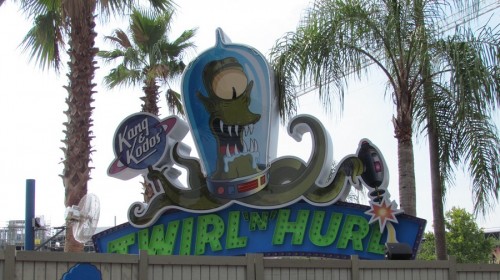 Universal Studios Florida has an expansion of its own going on at one of its popular lands based on The Simpsons animated TV show. Sure, it’s not New Fantasyland, but it does make you feel like you’re in the city of Springfield. In addition to some food and drink locations, they are adding one new attraction — Kang and Kodos’ Twirl ‘N’ Hurl. Here’s a video of the spinner testing at Universal Studios Florida.

If you look close you can see the ‘milk jugs’ being used as weights to really put the ride through its paces. This video was recorded on July 27th and it appears that the whole area could be opening in just weeks.