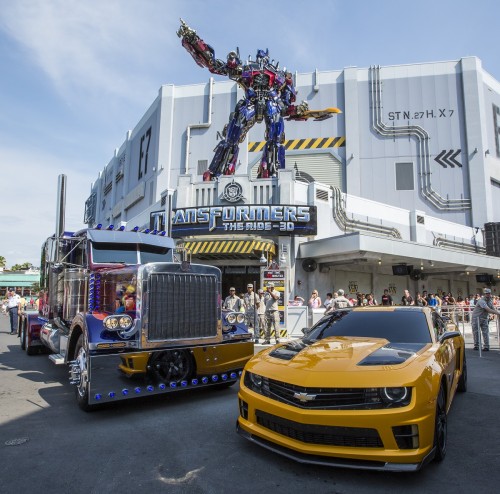 Leader of the Autobots, Optimus Prime, and his sidekick Bumblebee have arrived at Universal Orlando Resort to get ready for the grand opening of Transformers: The Ride – 3D – which will take place this Thursday, June 20. I’ve been able to sneak on a couple rides during the attraction’s technical rehearsals (aka soft opening). The attraction is essentially a clone of the California Transformers attraction, which a more compact layout that requires an elevation change. You don’t really notice the up and down movement, because your eyes are transfixed on the action happening in front of you.

From ground breaking to its official opening construction of Transformers took less than 12 months. That’s the fastest they’ve ever built an attraction at Universal Orlando. Watch this time-lapse video showing the construction compressed down to about 30 seconds:

The ride system itself is very similar to the Spider-man 3D attraction at Universal’s other park Islands of Adventure. The main difference is the heavy CG animation used in the Transformers has a realistic feel, while Spiderman is obviously set in a comic book universe. They throw the usual set of tricks at you, but do it in such a fun way that you don’t really mind the similarities between the attractions. You could really ride both on the same day and have two difference experiences.

For the grand opening on June 20th the famed Autobot duo of Optimus Prime and Bumblebee will be rolling through Universal Studios Florida looking for recruits to join them in the battle to save Planet Earth from the Decepticons. Transformers: The Ride – 3D pushes the limits of technology to place guests in the middle of a larger-than-life battle between the Autobots and the Decepticons and offers a transforming experience for theme park guests.

So far when I’ve been on the attraction, the Express Pass hasn’t been available. That meant the Standby queue moved at a steady pace (barring any attraction breakdowns). When the Express Pass opens, the single rider line will become a great option to a standby queue that will snake slowly through its rooms. Hopefully you’ll be able to spend much of the wait inside where it’s air conditioned. As you can tell by the size of this exterior queue, they’re expecting huge crowds with long waits. 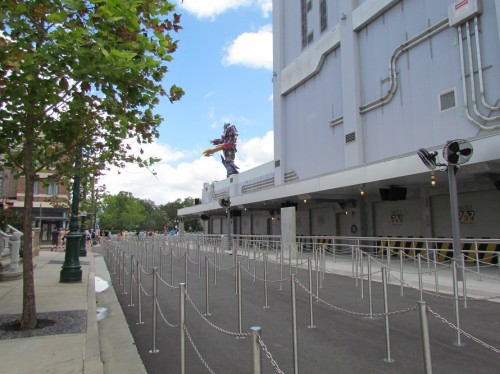 If the line is too long, there is also a great meet and greet area around the back of the attraction where you can get your photo taken with the Transformers. Then come back when the evening has fallen and you won’t have to worry about sun beating down on your head in that huge queue. But do come back Transformers is a terrific ride.