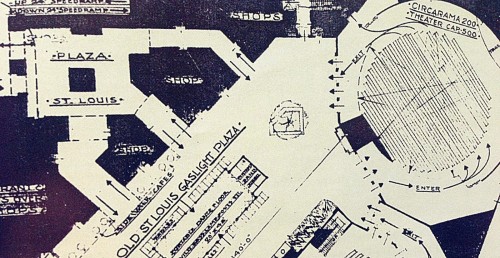 Todd Pierce at the Disney History Institute has wrapped up his 10-part series on the Saint Louis Riverfront Square development that Walt Disney has proposed building in what he considered his home state of Missouri. The project was to be the net evolution after Disneyland. An

Without the riverfront project, the Disney themepark experience we all know and love would not have existed:

Over the course of two years, as Riverfront Square was designed, two attractions slowly merged into one: a true-life adventure attraction in which guests journeyed through a Louisiana Bayou to glimpse alligators joined with a pirate grotto attraction in which guests witnessed the adventures of Jean Lafitte and other nineteenth-century pirates. The end result, Pirates of the Caribbean became one of the most famous attractions ever designed by Disney. Without Riverfront Square, Pirates of the Caribbean (as we know it at Disneyland) may have never existed as a Louisiana boat excursion.

Read the whole series. (start with part 1) I learned quite a few things, for instance, I didn’t know that Walt Disney actually approved the sale of beer at the Riverfront Square. I had been told he refused to sell beer and that was the reason he pulled out (Admiral Joe Fowler was quoted saying as much). The truth is more typical of any development, but not any less interesting, financing and a little plot of land he had just purchased down in Florida.

previousOnce Upon a Time 2-21: Second Star to the Right
nextEuro Disney Continues to Post Losses, but Gap Narrows